Female cartoon characters from the 80s were fun, adventurous … and a beacon of empowerment. From She-Ra to Jem, female cartoon characters made it clear that girls could be just as powerful and strong as boys. They showed young girls everywhere that they didn’t need to wait for someone else to save them – they had the power within themselves. Do you remember these great girl ‘toons?

She-Ra is the female coutnerpart of He-man, and the princess of Eternia. Originally introduced in 1985, she became an icon for female cartoon characters with her long blonde hair flowing behind as she rode on her horse, Swift Wind. Her enemies were primarily males (or “evil Hordes”), and she was a female hero who would rescue captured souls from the forces of Hordak.

Jem is an American animated series that ran on Saturday mornings in Canada and weekday afternoons in America for 65 episodes, originally airing between 1985-1988. The show followed Jerrica Benton (a female lead) and her alter ego Jem, who was a female singer. The show is about music business it follows the adventures of Jerrica Benton (a female lead) as she transforms into pop star “Jem” on stage at Starlight Music Corporation.

Steelheart was a mechanic and the only female member of the SilverHawks. She’s also the twin sister of Steelwill, bringing some sibling rivalry and support the part-human, part-metal team of superheroes recruited by Commander Stargazer. In all, the show ran for 65 episodes over the course of a single season in the fall of 1986.

Smurfett is the only female member of the 100-strong group of Smurfs. She was first introduced in 1981, as a female counterpart to Brainy Smurf, Clumsy Smurfs, Papa Smurf, and all the other little blue dudes in the male-dominated Smurf Village. Not surprisingly given the logistics of the situation, Smurfette was always highly in-demand as an audience for the other Smurfs — as a date, for help with cooking or sewing, or just for a sympathetic ear.

Strawberry Shortcake is the girl at the center of a group of other young women, each with dessert-themed names, clothing, and shticks. Originally just a character used by American Greetings Entertainment to grace their greeting cards, Strawberry Shortcake became an animated female role model for young girls with her own show. In the 2000s, DIC Entertainment relaunched the line of everything Strawberry.

Penny is the niece and sidekick of Inspector Gadget, a detective who fights crime and, especially, the M.A.D.D. crime conglomerate. Penny is (maybe) an orphan who works with her uncle and likes to help him solve crimes. She has gadgets of her own that she invents out of household objects like hairbrushes or toothpaste tubes. Penny’s dog, Brain, also assists her in fighting crime.

Rainbow Brite is a female character who comes to a drab, colorless name as a girl named Wisp, with the charge of bringing color to Colorless World. She is assisted by her companions, Twink a magical sprite who assists Wisp in finding the Sphere of Light — the key to sprucing up the place!

Lady Lovely Locks is a female character who has long, blonde hair with a rainbow streak. She’s also got the power to see into other people’s thoughts and feelings. Aided by the the Pixietails, Lady Lovely Locks protects her homeland — the Kingdom of Lovelylocks — from evildoers.

April O’Neal is female character from the cartoon “Teenage Mutant Ninja Turtles.” April has dark hair and bangs. She’s a reporter for Channel Six news (hence her job title) who was employed by Krang to find out where Shredder, leader of the Foot Clan, would strike next. Classic Chills: Remembering the Best Horror Movies of the 1950s 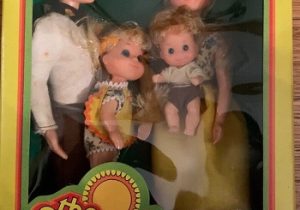 The Sunshine Family Having Fun Together